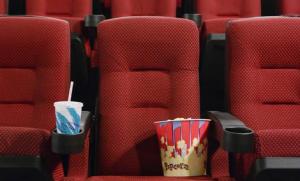 It seems the eye of Sauron that is BBC Watchdog is turning our way this week. Apparently there’s going to be a piece on how cinemas are ripping off the world when it comes to popcorn prices.

So I thought I’d make few short points before the torch bearing crowds storm the box office and dunk their local cinema owner in the village pond.

I have a love/hate relationship with popcorn. Personally I never eat the stuff, but that’s probably because I’ve been surrounded by sackfuls of it my entire life.

For me popcorn falls into the category of screen advertising, I would happily do without it but the amount of money it generates is vital for the survival of my business.

Without popcorn and adverts the ticket price would have to double. I figure most people would rather put up with fifteen minutes of car ads and the existence of the crunchy yellow peril than pay more for their seat.

In fact I doubt people would turn up at all should we increase ticket prices to that extent.

Running a cinema, believe it or not is an expensive business. More crucially, it costs the same to run however well or badly the films are doing.

Big films generate a lot of cash which is marvelous. Although the film hire is usually more, so we are left with less.

As you can imagine, the money tank empties really quickly.  So when the sun comes out and you’re all in the garden cooking in up turned rusty cans, never giving going to the pictures a moments thought, or the films are so bad giving away free gold ingots wouldn’t entice you in, I’m still shelling out thousands of pounds to keep the place open on the off-chance one day you might return.

I’m not asking for any sympathy, that’s the nature of being in business. Just pointing out how things work.

Of course the profit on popcorn is high, I thought everyone knew that. But it needs to be as part of the overall survival plan.

Consider the ticket price. After the Chancellor has taken his 20%, the distributor has taken their (on average) 50% of what’s left, we have to pay all the running costs out of the remainder. And that’s a long list of things, before I even think about feeding the family.

It means that profit on cinema tickets is actually quite low. We need the sales to make up the shortfall. Sorry.

There are two other important points. Firstly, and I mean this in the nicest possible way, nobody is forcing you to buy popcorn, it’s an extra. I’m glad you do and thank you very much for doing so, but it’s not compulsory.

I do try to be as fair as possible, and our prices certainly don’t reach the levels seen at circuit cinemas. It could be argued more fool me as they seem to sell vat loads more than us, but I can’t bring myself to go quite that high.

Secondly, have you seen the mess it makes? After a full house of Harry Potter it looks like a ten ton bomb made entirely of popcorn and sweet wrappers has gone off.

It all has to be cleaned up and it all causes extraordinary wear and tear on the carpet and seats. Seats and carpet are expensive items. A good seat is getting on for £200 each, which is why I can’t afford to replace them as often as I’d like.

So like most things in business dear Watchdog, it’s not as simple as me twirling my evil mustache and laughing insanely as I fool you into parting with your hard-earned cash.

I’m just trying to make an honest living. Like most of us.