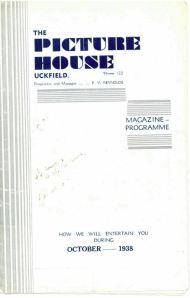 What were we showing in October 1938 and did people tear themselves away from the wireless to come? We'll never know.

On the face of it it’s very simple, I tell you what films we’re showing and you buy tickets. Result, happiness. For films everyone wants to see it really is as simple as that.

We fret and worry about how best to market a film locally but the truth is, if it’s the right film people will come. There is very little I can do to significantly alter a movies box office fate.

While we were playing the appalling rom com Something Borrowed I could have spent hundreds of pounds on full colour spreads in the local paper or danced down the high street dressed as an elephant handing out leaflets,  it wouldn’t have made a sodding bit of difference. No one wanted to see it, full stop.

Conversely a single lineage ad in the local free sheet stating the new James Bond starts Friday would be more than enough. We’d still be packed.

I learnt many years ago you literally can’t give tickets away for a stinker. Trust me, I’ve tried. I also learnt some kind of weird jungle drums effect takes hold as soon as Judi Dench dons Victoria’s widow’s weeds. How do they know? How do they sniff them out?

Before half of Soho drowns itself in its own skinny latte, I’m not suggesting that a good marketing campaign can’t do wonders for the bottom line and there have been some masterful examples of making a little go a long way over the years. Obviously the live stuff requires local marketing, but for mainstream films were pretty impotent.

We rely almost entirely on the national campaign to generate the most crucial part of movie marketing, word of mouth.

The strongest local marketing tool we have these days is the website. For such a small place we do get a very large number of hits and online booking now accounts for over 50% of our ticket sales.

Which is where I run into trouble.

Because I do all of the online elements of The Picture House myself and because I can passionately hate a film as much as I love it, it’s really difficult sometimes not to let that come across.

For films I love it can obviously be a bonus. I like to think my opinion counts for something, although in truth it seems to make little difference. I virtually wet myself over Let The Right One In and almost said as much on the website.

No bugger turned up to watch it though.

In the end I want you to come and buy a ticket whatever I think of the film and I’m not the final arbiter on whether you may or may not enjoy it. If you liked Eat Pray Love, that’s your problem and you should probably seek help.

The worst ones are those you know are crap and you know no one is going to come and see. I can put up with tosh if it’s taking money, but trying to galvanise myself to set up web pages, write synopses, programme the computer, do the press, for a 24 carat turd like Extraordinary Measures is soul-destroying.

I really had my head up my backside when I booked that one.

My intention is not to mislead you, but I’m hardly going to put “avoid this like the plague” on the website am I? Perhaps I worry too much, the world is full of people selling you rubbish, to a large degree it’s up to you to weed it out.

People often say to me how good the films we always show are. Which makes me feel really guilty, because it’s not true. They just came for the good ones.

In my experience there are three important things we need to do. Firstly when people do decide there’s a film out there they want to see make the programme information readily available , on the web, in the press or front of house.

Make buying tickets as easy as humanly possible and most importantly make your cinema as good as you possibly can so that when making a decision where to see a film the punters choose you.

Then all I have to do is book the right film. Easy.

4 thoughts on “If you show it they will come. Won’t they?”